Last night I was excited to attend The Albert’s “Local Drinking Locals” Beer Dinner with Monday Night Brewing courtesy of Food Tours Atlanta. Thank you Cristy! This week’s beer dinner series featured a 4 course meal pairing with craft beer from Monday Night Brewing. Monday Night Brewing is a local brewery located here in Atlanta. Being one of my favorite brands of beer, I was very curious as to what The Albert had prepared to compliment this great beer.

I really enjoyed the flavors in the ginger-carrot dressing. It married well with the Fu ManBrew, which is also brewed with notes of ginger. It was a very nice start to our dinner.

This had to be one the best piece of chicken I’ve had in awhile. The flavors were just amazing! The brussel sprouts were roasted and seasoned to perfection! And to top this perfectly executed course off, there was serrano pickled pears mingling amongst the awesomeness. I need a jar of these pickled pears at my house! It was paired with the very tasty Serrano Eye Patch Ale. With the notes of serrano, this crisp IPA, gave you a punch of flavor that you gladly accepted. 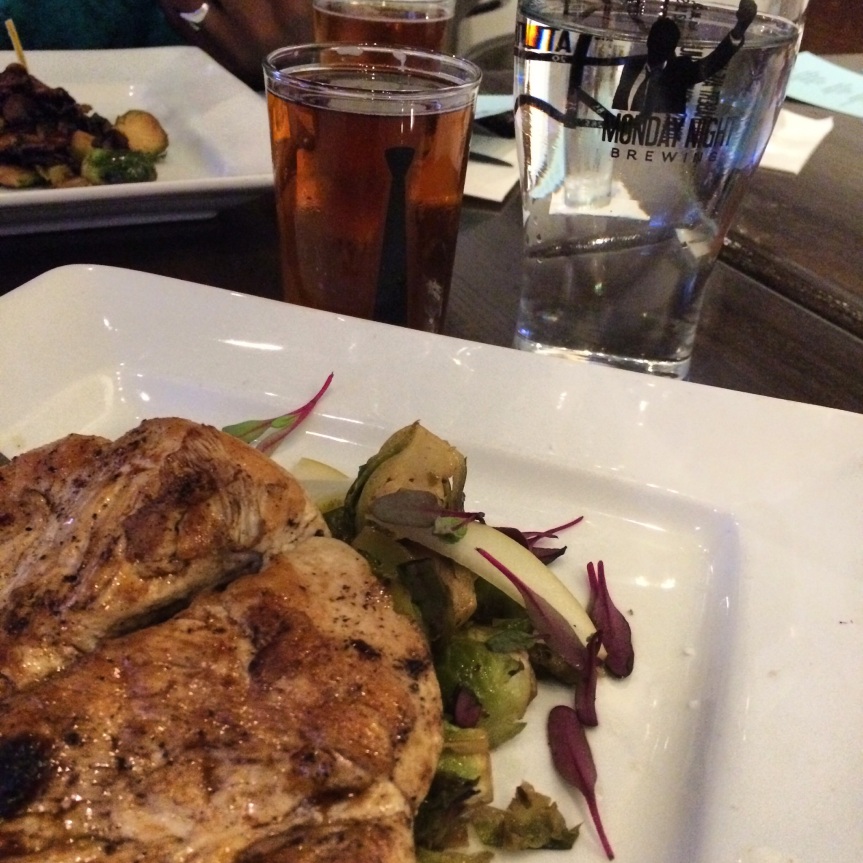 Yes. Hickory Smoked Blueberries!!! This is what I was dying to tasted as I reviewed the menu before the dinner began. The smoking the blueberries were just genius! The hickory flavor was definitely there. The blueberries were on top of a slice delicious buttermilk pie. To compliment this delectable course was Monday Night Brewing’s Drafty Kilt Scotch Ale. With notes of cherrywood-smoked malt, chocolate malt, and roasted barley is was the perfect beer to enjoy with this course.

This was just a great all around culinary experience. If you’re interested in such awesomeness, join The Albert on September 15, 2015 as they continue their beer dinner series with Red Brick Brewing Co.

For more information about Monday Night Brewing visit www.mondaynightbrewing.com. Be sure to stop by the brewery for a tour as well!